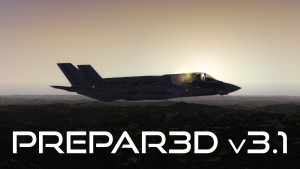 Today announces the release of the first update to Prepar3D v3!

The Prepar3D v3.1 update is available now and can be downloaded from your Downloads page. If you currently own a valid Prepar3D v3 license, there is no charge to update to Prepar3D v3.1.

For the first time, we will be offering separate updates for the Client, Content, and Scenery. This will make updating faster and easier than ever before. Please be sure to read the Prepar3D v3 Download and Installation Directions for more details on how to update to the v3.1 release.

The Lockheed Martin Prepar3D team loves hearing about your experiences with Prepar3D at our Forums. The forums also give us an opportunity to listen to your feedback as we continue Prepar3D development. We’ve partnered with our forum users and with several featured developers to continue to bring added features, enhancements, and optimizations all while bringing additional backwards compatibility, bug fixes, and stability to Prepar3D v3.1. The new v3.1 introduces improvements to the water system, a new controller calibration screen, OGG audio support, and numerous bug fixes.

You can find a full list of What’s New below.

The following list of updates has been categorized based on the installer required.

If this is your first time installing Prepar3D v3, you can simply install Prepar3D v3.1 directly.

Prepar3D v3.0 will no longer be available from Prepar3D.com.

Thank you for your continued support for Prepar3D.

We hope you find that Prepar3D v3.1 continues to be the most immersive learning, simulation, and training platform available.